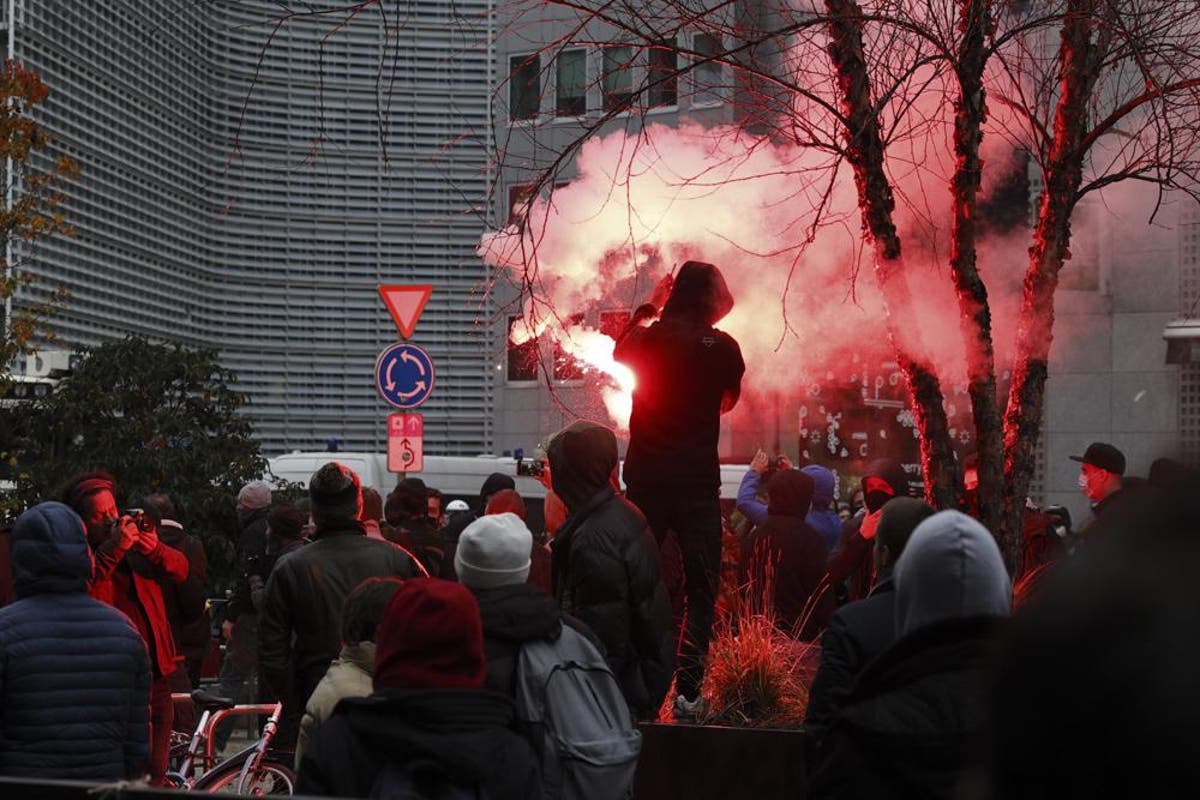 Austria is entering a 10-day Covid lockdown as protests against restrictions break out in Europe amid surging infections across the continent.

All Austrian citizens face tightened restrictions from Monday after officials first proposed limiting the lockdown to those refusing vaccinations. Jabs will be made mandatory from February next year.

Despite protests against the measures, people are being told to work from home and non-essential shops are now closed in what is the central European nation’s fourth lockdown.

The fresh clampdown comes after protests in Belgium and the Netherlands descended into violence. Police used water cannons and tear gas to disperse crowds in Brussels on Sunday.

A second night of rioting broke out in the Netherlands on Saturday. An emergency order was issued in the Hague where police used horses, dogs and batons to chase the crowds away.

The World Health Organisation warned that Europe could see 500,000 more deaths by next spring if vaccines programmes aren’t progressed and restrictions such as face masks and Covid passes aren’t brought in.

Mr Spahn told a news conference that there were two reasons for promoting the Moderna jab. First, there are some 16 million Moderna doses that could expire in the first quarter of 2022 if unused. And second, a high demand for the Pfizer/BioNtech jab has led to a depleted stock.

“Unfortunately the impression is we will insist on Moderna only to avoid the expiry of those vaccines in the first quarter of 2022,” Mr Spahn said.

“This is an important aspect but it is not the decisive one. What’s crucial is that our BioNTech stock is emptying so fast that coming next week we won’t be able to deliver more than 2-3 million doses a week.”

He added that some experts had described the Moderna jab as the “Rolls-Royce” of vaccines, while the Pfizer/BioNTech jab was considered to be the “Mercedes”.

Education secretary Nadhim Zahawi said he believes the UK could be the first major economy to demonstrate how to transition from pandemic to endemic using Covid-19 vaccines.

He told LBC: “Our four-step plan meant that we were able to open up the economy in the summer. Some said it was a mistake – I think it was absolutely the right thing to do.

“We will probably, I hope, without being complacent, be the first major economy in the world to demonstrate how you transition (from) pandemic to endemic using vaccines.”

More Covid comments from the health secretary below:

Most places people gather, like restaurants and bars, cannot open their doors for 10 days initially and maybe as many as 20, now that a lockdown has been impossed in Austria.

Christmas markets, a big draw for tourists that had only just begun to open, also shut but, in a last-minute change, ski lifts remained open to the vaccinated. Hotels, however, closed to tourists not already staying there when the lockdown began.

“I’m really tired of these lockdowns. I’ve just had enough,” a 42-year-old lawyer who gave her name only as Irena said on her way to work in central Vienna.

Asked whether a lockdown could have been avoided, she said: “If you look at other countries, I think so… The political leadership definitely failed on all levels.”

Vienna’s streets were quieter than usual on a chilly, overcast Monday as many shops stayed shut but people went to work. The government is urging people to work from home where possible.

The first of nearly 100 million doses of Johnson & Johnson Covid vaccine being donated by the European Union by year-end have begun arriving in African countries, a statement by the GAVI vaccine alliance said on Monday.

Belgium negotiated the deal as part of the bloc’s overall pledge to share at least 500 million doses with low and lower-middle income countries by mid-2022, the Geneva-based group, which leads the COVAX initiative, said in a statement.

“The first doses have reached Niger, with more doses arriving in a number of countries this week,” Ursula von der Leyen, European Commission president, said in the statement that also listed Guinea Conakry, Mauritania, the Central African Republic, Djibouti, Nigeria, Togo and the Republic of Congo.

Czech Republic and Slovakia ban unvaccinated from pubs and services

The Czech Republic and Slovakia banned unvaccinated people from pubs and services from Monday after a surge in Covid cases filled hospitals’ intensive care wards, with most of the seriously sick patients not inoculated.

The central European neighbours both adopted the new measures last week, a step behind Austria which first set restrictions on unvaccinated people but went for a full lockdown on Monday as the region experienced the world’s latest hotspot.

The Czech government has dispatched soldiers to help at strained hospitals – which together had over 700 people in intensive care units. Later on Monday the government was due to discuss calling a state of emergency to give it extra powers to order medical students to help.

The new Czech measures will only allow people who have been vaccinated or who have recovered from Covid in the past six months to visit restaurants, hotels, services or public events like sports games.

Boris Johnson has said his government currently sees no need to introduce fresh restrictions despite rising cases across much of Europe.

Speaking at the CBI conference in South Shields, the prime minister said: “Of course we are concerned about the potential from that disease.

“You have got to be humble in the face of nature but at the moment we see nothing in the data to say that we need to move from plan A to plan B, or any other plan.

“The best single thing you can all do is get your booster. When you are called forward to get it, please do so.”

French President Emmanuel Macron on Monday called the situation on the French Caribbean island of Guadeloupe “very explosive” and said public order must be maintained in the overseas territory after violence erupted there last week over Covid restrictions.

Trouble flared wafter walkouts organised by the territory’s labour unions to challenge restrictions such as the mandatory vaccination of health workers.

He described the situation in Guadeloupe as “very explosive, which has a very local context and tensions which we know about, which are historic.”

Get vaccinated or get Covid, German health minister tells citizens

Germany’s health minister said Monday that the rapid rise in coronavirus cases means it’s likely everyone in the country who isn’t vaccinated will have caught Covid by the end of the winter — and some of those will die.

Health minister Jens Spahn urged Germans to get vaccinated, including with booster shots if their first round of inoculation occurred more than six months ago, to reduce the risk of serious illness.

“By the end of this winter pretty much everyone in Germany…will have been vaccinated, recovered or died,” Spahn told reporters in Berlin.

Is the UK’s current strategy on Covid the correct one?

Join Samuel Lovett, our science correspondent, and a panel of top experts on Thursday for a discussion on whether the government’s ‘Plan A’ will be enough to keep Covid infections and hospitalisations at bay.

You can sign up for the event, taking place at 1pm, by following the link below:

Hungary offers vaccines without prior registration

People were lining up for Covid-19 shots outside Budapest’s main hospitals on Monday as Hungary for the first time offered vaccinations without prior registration amid a surge in new infections.

Hungary reported a record high tally of 11,289 new cases on Friday and on Monday reported 27,209 new cases for Friday to Sunday and 392 deaths.

Hungary, with a population of 10 million, has reported 33,172 coronavirus deaths in total.

Despite people lining up for shots, Hungary’s vaccination rate lags the EU average, with about 5.8 million people having had the two shots.

The government imposed mandatory mask wearing in closed spaces last week and said it would make COVID shots mandatory for all healthcare workers.