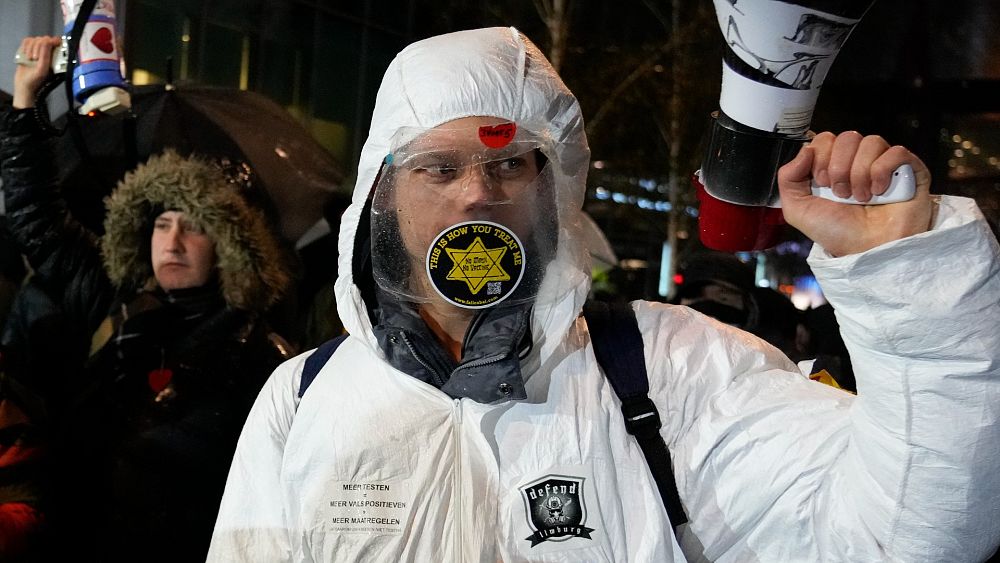 COVID-19 cases are on the rise again in various parts of Europe as the cold weather has affected the spread of the virus.

Countries on the Old Continent are attempting to curb the spike through various means – from a national lockdown in Austria, to limiting access to certain services elsewhere or pushing for an increase in vaccination rates.

Around 60% of people in Western Europe are fully immunised against COVID-19, but only about half as many are vaccinated in Eastern Europe.

Brussels has said that everyone should receive a booster shot six months after being fully vaccinated. Meanwhile, its digital COVID certificate — used for cross-border travel — will expire nine months after the last vaccine dose.

Concerns over a new variant in South Africa prompted the EU to recommend new travel curbs.

The World Health Organization has warned Europe and Central Asia could face another 700,000 COVID-19 deaths by March 1. It said deaths due to COVID-19 rose to nearly 4,200 per day last week — a doubling of levels recorded at the end of September.

Here is a run-down of the latest situation in some of the European countries.

Boris Johnson announced new entry rules on Saturday with travellers required to take a PCR test within two days of arrival and self-isolate until they get their results. He also said that requirements for face coverings in shops and on public transport would be tightened.

The new rules, announced hours after two cases of the new Omicron variants were detected in the UK, will be reviewed in three weeks.

Belgium on Friday became the first European country to announce it had detected a case of the new COVID-19 variant, later branded “variant of concern” by the World Health Organisation and named Omicron.

Surging cases also prompted the government to announce new measures. The country will close nightclubs and require people to work from home as part of an effort to curb COVID-19 cases. The government issued new measures on Friday (November 26) including shutting bars and restaurants from 11 pm.

Events held indoors must be seated and private meetings, besides weddings and funerals, are banned.

The surge exceeded “the most pessimistic curves” drawn last week by experts, he said in a statement.

A new round of restrictions was announced on Friday including the closure of all non-essential shops including bars and restaurants from 17:00 to 05:00.

Hospitality and cultural venues have to ensure people are seated 1.5m apart, which “means fewer people can be admitted to these locations,” the government said.

Amateurs sporting events are also not permitted between 17:00 and 05:00 with professional sport events allowed to proceed but with no spectator.

The call to work from home has been tightened

The tighter curbs come just days after the Dutch caretaker government implemented a partial lockdown on November 13, forcing bars and restaurants to close at 8 pm.

The soaring number of cases in this nation of 17.5 million comes despite more than 84% of the Dutch adult population being fully vaccinated. Cases rose sharply among children aged 4-12, most of whom have yet to be inoculated.

A 30-day state of emergency comes into effect on Friday (November 26) as the Czech Republic sees record-high COVID-19 cases.

As part of the government’s anti-COVID measures, all Christmas markets across the country are banned and people will not be allowed to drink alcohol in public places, health minister Adam Vojtech said. Bars, restaurants, nightclubs, discotheques and casinos have to close at 10 p.m.

The number of people at culture and sports events will be limited to 1,000 who are vaccinated or have recovered from COVID-19 All other public gatherings can be attended by up to 100 visitors, down from 1,000.

Prime Minister Andrej Babis also said the government has been considering mandatory vaccination for certain groups of people, including the elderly, medical and military personnel and police officers. Just over 58% of the Czech population has been fully vaccinated.

It comes less than two months after the country scrapped most curbs when the goal of vaccinating 86% of the population against COVID-19 was reached.

A recent rise in coronavirus infections compelled the government to act, Costa told a press conference, though he noted that his country hasn’t seen a surge on the scale witnessed elsewhere in Europe.

From December 1, wearing a face mask will once again be mandatory in enclosed spaces; a digital certificate proving vaccination or recovery from the coronavirus must be shown to enter restaurants, cinemas and hotels; and even inoculated people must have a negative test to visit hospitals, elderly care homes, sports events and bars and discos.

Furthermore, everyone arriving on a flight from abroad must present a negative test result.

Official figures released on Thursday (November 25) show Germany has become the latest country to pass the grim milestone of 100,000 deaths from COVID-19 since the pandemic began.

Germany’s disease control agency says it recorded 351 additional deaths in connection with the coronavirus over the past 24 hours, taking the total toll to 100,119.

In Europe, Germany is the fifth country to pass that mark, after Russia, the United Kingdom, Italy and France.

Earlier in the week health minister Jens Spahn warned Germans will be “vaccinated, cured or dead” by the end of the winter.

Slovakia declared a 90-day state of emergency and a two-week lockdown following a spike in COVID-19 cases that saw the country’s seven-day average of cases rise above 10,000.

The central European country is currently in the midst of the world’s fastest rise in infections, and the measures, which include closing all non-essential stores, as well as bars and restaurants, are meant to help the struggling healthcare system.

The decision came after president Zuzana Čaputová addressed the nation on Tuesday, saying that “Slovakia is losing the battle against COVID.”

Just 45.3% of the 5.5 million population is fully vaccinated.

Health minister Olivier Véran announced on Thursday (November 25) that booster doses would be available for everyone over the age of 18 and that masks would be required in all indoor settings as cases, hospitalisations and deaths rise in the country.

Some 76.8% of France’s 67.4 million people are fully vaccinated, according to the latest figures.

Starting December 6, only people with proof of vaccination or of having recovered from COVID-19 can eat at indoor restaurants, go to the movies or attend sporting events. Having just a negative test result is no longer acceptable in what was dubbed a “reinforced” or super green pass.

A new government decree also made vaccinations mandatory for law enforcement, military, and all school employees, among others. Previously, vaccines were only required for health care workers.

On public transport, passengers must wear an FFP2 mask or equivalent.

Austria has gone back into a national lockdown as of Monday (November 22), becoming the first EU country to take such a measure in the face of the COVID-19 resurgence.

The lockdown will last at least 10 days but could extend to 20, officials said.

The announcement came a few days after the country implemented a nationwide lockdown for people who are unvaccinated, which came into force on November 15, but this did not slow the spread of the virus sufficiently.

Authorities in Austria said on November 17 that travellers would need to show a negative PCR test upon entering the country. Previously, results from the cheaper lateral flow tests were allowed.

Coronavirus infections in Russia have started to fall but daily deaths are still at an all-time high.

Cases surged in October amid low vaccination rates and lax public attitudes toward taking precautions. About 40% of Russia’s nearly 146 million people have been fully vaccinated, even though the country approved a domestically developed COVID-19 vaccine months before most of the world.

The Swedish government has announced that from December 1 a health pass will be required to attend any event of more than 100 people.

The COVID pass — attesting that the holder has either been fully vaccinated, tested negative over the previous 72 hours or recovered from the disease over the preceding six months — has so far only been used in Sweden for travel purposes.

New COVID-19 restrictions came into force in Ireland on Thursday (November 18) due to high rates of infection that have put pressure on hospitals.

People were told to work from home unless attending the workplace is “absolutely necessary”.

A requirement for COVID-19 passes (based on vaccination or recovery) is extended to cinemas and theatres, while closing times for all on-licensed premises, including in hotels, will move to midnight.

From December 9, unvaccinated civil servants and social workers will be fired, the government said.

Ukrainian president Volodymyr Zelenskyy announced on November 16 that those who receive two jabs of the vaccine will be given a payment of 1,000 hryvnias, or about 33 euros in an attempt to alleviate vaccination reluctance.

Statistics on how many people received both doses vary greatly, with reports claiming that it stands anywhere between 20 and 28 per cent.

The Swiss government has not issued new COVID-19 measures despite a surge in cases.

Voters will decide on the COVID-19 law on Sunday (November 28) that imposes a COVID pass in the country.

If the Swiss vote yes on the law, the government could implement further anti-virus measures.

Cases are beginning to decrease in Bulgaria after a massive surge in October but the vaccination rate is still quite low at just a quarter of the population.

Like Bulgaria, Romania has found itself in the throes of a deadly spike in cases in October, but cases have now been decreasing since the beginning of the month.

The country has still been reporting more than 200 deaths per day; just around 37% of the country’s population is vaccinated.

Tens of thousands in Zagreb took to the streets to protest tighter COVID restrictions after the government announced plans to introduce mandatory COVID passes for government and public employees, including school teachers.

Just 39% of the entire population is vaccinated, and 38% of the population in the country received two doses of vaccine, according to the latest figures.

COVID-19 restrictions ended on Monday (November 15) and the government has now revised its measures, allowing for those with certificates proving vaccination or recovery to access all services.

Restrictions are still in place for the unvaccinated, who can as of Monday only do basic things outside of their homes, such as grocery shopping or travel with public transportation.

The country also banned unvaccinated MPs from attending parliament and participating in meetings.

Denmark will offer COVID-19 booster jobs to people over the age of 18, the health authority said on Thursday (November 26), stating that immunity was declining for people in younger age groups as well.

On November 12, Denmark reintroduced its digital pass as it declared COVID-19 “a socially critical disease” once again amid an increase in cases.

For the next month, a valid pass is mandatory in order to enter nightclubs or cafes or to be seated indoors in restaurants.