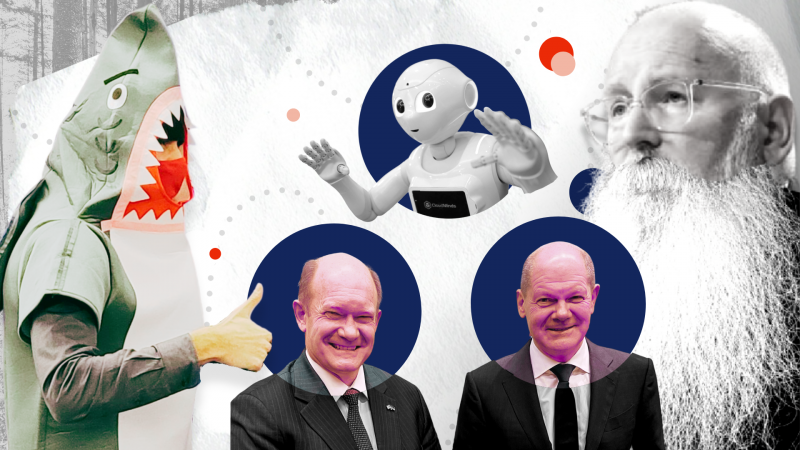 Cop26 drops a clanger, shark mascot is an absolute banger, and  Olaf Scholz has surprising doppelganger.

COP26 wrapped up last Friday and we’re all going to be dealing with the fallout for at least a decade.

When Boris Johnson says the #Cop26 deal is a ‘game-changing agreement’ he means its gone from ‘Risk’ to ‘Cards Against Humanity’ right? Asked Tiernan Douieb.

When Boris Johnson says the #Cop26 deal is a ‘game-changing agreement’ he means its gone from ‘Risk’ to ‘Cards Against Humanity’ right?

The talks crawled on interminably, but little was actually agreed.

IndustriALL Europe described the Glasgow Climate Pact as half-hearted, but said union calls for a real #JustTransition will only grow in volume.

In cheerier news, the EU institutions were awash with cute and huh? This week.

In a new communications push, the EU used an adorable robot to explain the difference between the Council of the EU, European Council and Council of Europe.

If it could do that, it would definitely fail the Turing test, said DG Meme.

Me as an EU civil servant: 🙅‍♂️

We’re too often criticized for being faceless bureaucrats, this won’t help.. https://t.co/d1nvKFDoDy

Elsewhere the Greens in the European Parliament rolled out a shark mascot as part of a campaign to protect #mako sharks.

Tom Athenstaedt said he was awestruck at meeting Samy Shark.

Samy certainly got around….

That said, an MEP making (probably knowingly) a meta reference to the TV show Parlement, we are all duty bound to like!

This week we are supported by SESAR – the mechanism that  coordinates EU R&D in air traffic management. Find out more about digital transformation, smart airports and the award winning Aeroporti di Roma, by following them online.

Finally this week – do not adjust your screen. No you don’t need to go to specsavers.

These really are two different people!

But Tom Nuttall has nothing but respect for them just going ahead and publishing this picture!