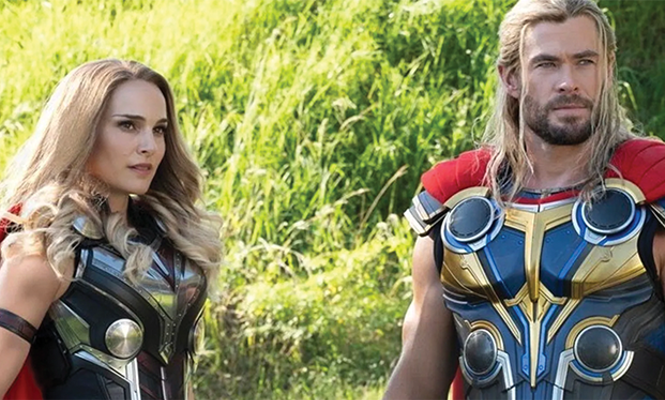 After 11 years playing Thor Odinson, I think it would be fair to say that Chris Hemsworth is currently the face of the Marvel Cinematic Universe. Other long-time players like Robert Downey, Jr., Chris Evans and Scarlett Johansson have moved on; Mark Ruffalo and Jeremy Renner are still technically in the fold, but have never headlined a feature; Doctor Strange and Spider-man, blockbuster successful though they may be, are still relative newcomers.

Only Hemsworth’s Thor has lasted long enough to earn a fourth solo adventure, which has allowed for a melding between the character and the sensibilities of the actor. And if you’ve seen him in things like the 2016 Ghostbusters reboot or the recent Netflix sci-fi thriller Spiderhead, you know that Chris Hemsworth is actually a born comedian in the sculpted body of a god

Writer/director Taika Waititi was able to harness some of that energy for 2017’s Thor: Ragnarok, creating an MCU entry that felt more like a pure comedy than anything else in the franchise to date. It makes sense that he’d lean into that sensibility for his return to direct Thor: Love and Thunder, but he’s attached that goofy vibe to a story where it doesn’t really make much sense.

For some reason, Waititi thought it was reasonable to take a narrative about despair, vulnerability and losing faith, and decide that hilarity naturally ensues.

The tale begins with an alien father named Gorr (Christian Bale) whose grief and anger at his god over the death of his daughter finds a purpose when he comes into position of a sword with the power to kill gods. That naturally puts him on a collision course with the survivors of Asgard, including the God of Thunder.

Or, as it turns out, make that Gods of Thunder—plural—as Thor’s old flame Jane Foster (Natalie Portman) becomes the wielder of Mjolnir, the hammer that had seemed destroyed in Ragnarok.

Waititi stirs up the pot with plenty of oddball scenarios built for punch lines as much as for punching. The seaside village dubbed “New Asgard” has become a tourist attraction, complete with cheesy dramatic re-creations and pun-ily named retail outlets, with the Asgardians’ warrior/leader Valkyrie (Tessa Thompson) stuck in ceremonial duties. There’s an amusing sideline where the semi-sentience of Thor’s axe Stormbreaker manifests itself in jealousy over the reconstituted Mjolnir; a fun montage reveals the story behind Thor and Jane’s breakup; that internet meme involving screaming goats somehow turns into a running gag. And then you’ve got Russell Crowe, hamming it up masterfully as a Zeus much more interested in flashy entrances and scheduling the next orgy than interceding in matters beneath his station.

All of that has its entertainment value, but it starts to clash pretty strongly with the ostensible central plot. Bale’s Gorr the God-Butcher—pale, balding, befanged and generally a visual clone of Ralph Fiennes’ Lord Voldemort—has a compelling arc, exploring the rage that can accompany a sense of divine indifference to mortal suffering. Meanwhile, Jane faces a potentially life-threatening health crisis, and Thor confronts what it would mean to make himself once again open to love after already having his heart broken.

But it never once feels like Waititi really takes that material seriously. No matter how furiously Bale tries to turn the idea of being abandoned by God into genuine pain, or how many moments we get at a hospital bedside, it always feels like something Waititi is obliged to include between jokes.

At least he’s got Hemsworth at the helm, and that does mask a multitude of sins, including bland visual style and Waititi’s over-fondness for slow-motion shots of his heroes leaping from left to right. By now, the actor has perfected the notion of Thor as a blustering beefcake rampaging through his battles with abandon but kind of haunted by his vulnerabilities and past failures. His comic timing is aces, and he understands thoroughly how to walk the tightrope between the image of invincibility Thor is trying to convey and the reality that it is just an image.

When Thor: Love and Thunder is simply an action-comedy, it’s playing to the strengths both of its star and its filmmaker. If Hemsworth is indeed sticking around for more Thor, maybe he could just be allowed to do what he does best.