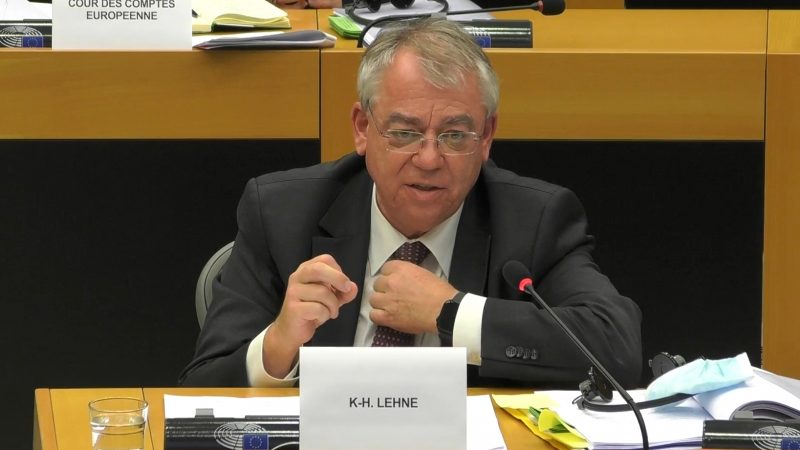 In response to an investigation by a French newspaper, Klaus-Heiner Lehne of the European Court of Auditors defended himself and his colleagues against the allegations in front of the budget control committee of the European Parliament. He did not rule out taking the case to court.

On Friday (26 November), the French newspaper Libération published an investigative article alleging mismanagement at the top of the European Court of Auditors, the institution tasked with controlling the EU’s spending.

The article titled “fraud at the head of the European Court of Auditors” alleged among other things that the court’s president, Klaus-Heiner Lehne, had a fictitious address in Luxemburg and that there was therefore no justification for the residence allowance of up to €3,600 per month that Lehne received.

The newspaper found that Lehne shared an apartment with employees of his cabinet. The article stated that the apartment was purely a “façade address” and that this could only be qualified as fraud to the EU budget.

Moreover, the article claimed that Lehne was not in Luxemburg very often and that, instead, he was still active in party politics in his regional CDU chapter.

Quizzed by the European Parliament’s committee on budgetary control, the president of the EU court of auditors defended himself against the accusations.

He denied that the Luxemburg address was fictitious and defended his choice of sharing the apartment with two members of his cabinet. “It’s my private business where and with whom I live in Luxemburg,” Lehne pointed out.

As for the allegations that Lehne was still active in German local politics to the detriment of his duties at the Court, Lehne denied having any active political role. He insisted that his “honorary presidency” of the CDU Düsseldorf was only a title and a sign of appreciation by the party for Lehne’s work in the past.

“I am not actively involved in any political activity. I have no mandate, nothing. It’s just not true”, Lehne said.

Isabel García Muñoz of the Socialists and Democrats (S&D) group insisted on a thorough investigation into the matter, fearing for the integrity of the EU court of auditors. “A lack of credibility of European institutions affects each and every one of us”, she said.

Pierre Karleskind of the centrist Renew Europe group also worried about the integrity of the EU in the eyes of the public. He therefore suggested Lehne to take the journal to court for defamation if he thought that the allegations were wrong.

“Do us all a service, file a lawsuit for defamation. But be sure of yourself. The journalist who published the article led to the fall of the Santer Commission and pushed Martin Selmayr to exile,” Karleskind warned.

Lehne confirmed that he was looking into pursuing the case in court. “We are in the process of deciding if it makes sense to do so or not,” he said, while regretting that the text was formulated in a way that would make it hard for him to prove the defamation.

Martina Hohlmeier, chair of the committee and party colleague of Klaus-Heiner Lehne, sometimes seemed to take over the task of defending the chief auditor herself during the hearing.

Reacting to Lehne’s regrets regarding the impracticality of taking the journal to court, she showed a lot of understanding. “I know this problem,” she said, adding that she had gone through the same thing but that it was hard to prove defamation. “This is a problem about press freedom,” she pointed out.

On Twitter, the author of the investigation, Jean Quatremer, reacted with disbelief at the discussions around pursuing journalists in courts of justice.

While the level of irregularities in the use of EU funds remained stable in 2020, the European Court of Auditors (ECA) is worried that it does not have enough resources to properly audit EU spending that is set to dramatically increase due to the Next Generation EU programme.