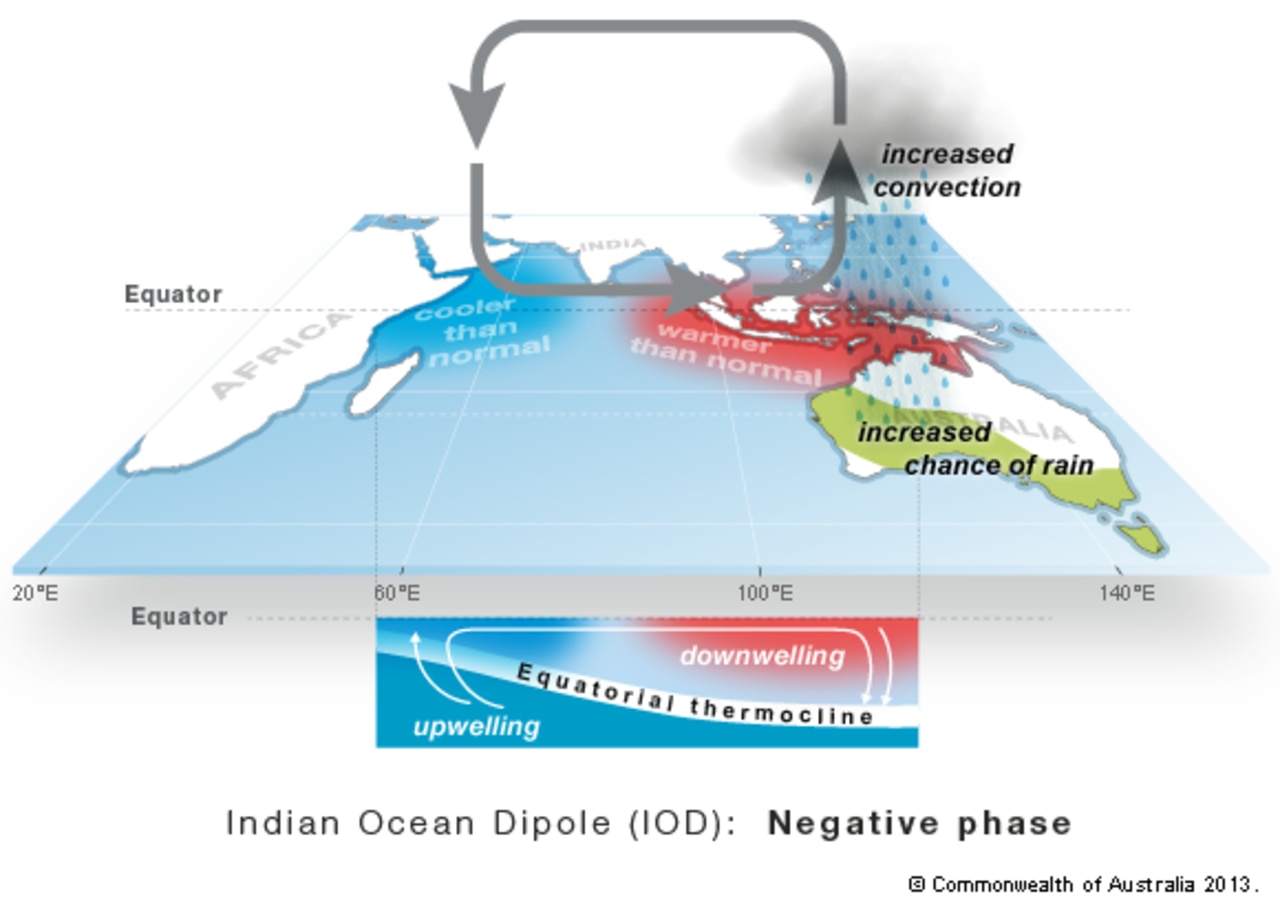 Australia’s wet patch will continue for months, a new finding reported by the Bureau of Meteorology suggests.

A negative Indian Ocean Dipole (IOD) has just been declared, meaning some serious wet weather is likely for large areas of the country throughout the rest of the year.

It is the second consecutive year we’ve had a negative IOD – the first time that has happened since the 1960s.

The IOD has three phases: neutral, positive and negative. Events usually start around May or June, peak between August and October and then rapidly decay when the monsoon arrives in the southern hemisphere around the end of spring.

The BOM reported the weather shift caused by a negative IOD could also have significant impacts on agriculture.

Over half of the country on the east coast has roughly an 85 per cent chance of exceeding last year’s rainfall through spring.

A fierce double whammy weather system will lurch across Australia this week which in some areas will bring “exceptionally dangerous” conditions.

Huge waves, hundreds of millimetres of rain, flash flooding and gale force winds are all on the cards. And it won’t be a flash in the pan either with the slow moving system potentially lasting all week.

As many as six states could be hit with Western Australia and parts of Tasmania, Victoria and New South Wales particularly in the firing line.

“A prolonged period of wet and windy conditions will impact southern Australia this week as a series of powerful cold fronts sweep across the country,” said the Bureau of Meteorology’s Johnathan How.

“There is a very large mass of cold and unstable air over the Southern Ocean. And it’s this entire complex that will shift northwards and bring those wet and windy conditions to the rest of southern Australia.”

“Firstly, it’s slow moving so it will take the entire week to move from the south of Western Australia towards the southeast.

“So because of the slow movement of the system, it’s not just a few hours of severe weather for Western Australia – it’s three days.

One front will move earlier in the week followed by another a couple of days later potentially bringing even more rain.

Adelaide was expected to see up to 10mm of rain on Tuesday with potentially damaging winds and thunderstorms for late morning onwards.

Rain will continue across much of the country on Wednesday, and then the front will come through on Thursday and Friday bringing up to around 25mm of rain over those two days.

A severe weather warning is in place for all of South Australia aside from the state’s north and extreme east around Remark. Damaging wind gusts of up to 90 km/h are a possibility.

Mostly clear in Melbourne on Tuesday before the wind cranks up in the evening.

Showers can be expected for the rest of the week but the rain totals will be below 10mm each day.

In Sydney, showers are expected on Thursday followed by mostly sunny skies and 22C highs.