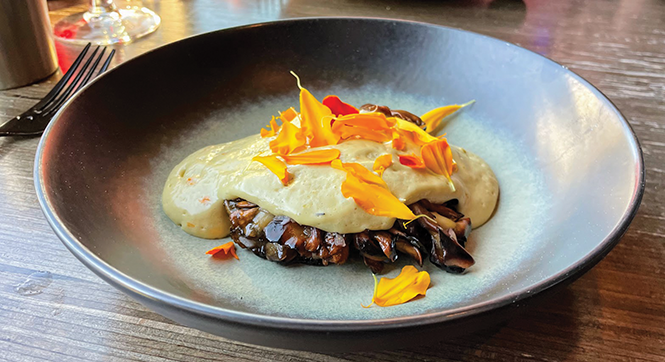 Before becoming City Weekly‘s resident food dude, I spent a lot of time writing music reviews and providing local concert coverage for our beloved alt weekly. As I’ve shifted to the local food beat, I am always surprised at the parallels between the music and food worlds. Albums become menus, singles become signature dishes and sous chefs step into the spotlight to launch solo careers.

The one area in which food differs from music, however, is the concert. Sure, when a chef opens a restaurant, the show must go on, but it’s rare to see a chef go from city-to-city and venue-to-venue to show off their talents to a legion of screaming fans. This, I feel, is where the pop-up comes in.

For example, let’s take Arthur, the summer pop-up event hosted by Chef Kevin Finch and his partner, hospitality marketing expert Alexa Finch. This finely-curated setlist of European-inspired cuisine, presented with sustainability in mind, is a delectable clarion call that will attract the most discerning of diners. I had the chance to attend Arthur’s inaugural event, complete with a backstage pass to visit with Kevin and Alexa, and I think it’s safe to say we can expect some great things from this local power couple.

Chef Finch is a Sugar House native whose international walkabout has taken him from an internship at The Grand America when he was 15 years old to Chef de Cuisine at the renowned Atelier Crenn. He met Alexa while working at Betony in New York, and the two have been traveling the world together ever since. “The original plan was to travel the world, gain a bunch of knowledge and come home and share that with everyone,” Kevin Finch says. “When I was a young chef, I was told not to open a restaurant until I turned 45, but COVID rapidly sped that up.”

With a stellar pedigree of restaurants in Chef Finch’s resume, the quest to open a spot of his own begins and ends with Arthur. “Arthur is a pseudonym my dad uses to make reservations at restaurants,” Kevin Finch says. “The concept is named after this fictional character who is a well-traveled man and likes to entertain and pour wine for others. So, the concept has some refinement, but is also accessible.”

Refinement with a healthy dose of accessibility was exactly what I found the menu to be at Arthur’s inaugural event. Nestled within the sleek space of Nohm (165 W. 900 South), Central Ninth’s coolest Japanese-inspired nightspot, a menu of lovingly prepared dishes that exemplify Chef Kevin Finch’s career danced across our tables. Alexa Finch was on hand to provide the wine pairings for the evening, each of which were primo complements to the seven luscious courses we received.

The menu kicked off with a dish called Best of Utah, a collection of locally grown root veggies presented with a tasty, mustardy sauce gribiche. The white radishes with a little kiss of smoke from the grill were the highlights here. Next up was some Monterey Bay squid with English peas set atop a savory, buttery custard. The squid was perfect, and that silky custard made this dish the perfect way to kick off a summer evening.

By the third course, it was clear Chef Finch wasn’t messing around. It was a grilled maitake mushroom topped with a healthy dollop of bearnaise sauce and sprinkled with marigold petals. Its appearance reminds you of everything you love about autumn, and the rich flavors were immaculately balanced. It’s a testament to the power mushrooms have to replace steak without any fuss, and this was easily one of the best things I have ever eaten.

Course four was a complete shift on the flavor spectrum—in all the best ways. It was a black cod fillet drenched in a sauce of roasted bones and pureed garlic. Where the maitake went all in with rich, umami flavors that left no tastebud unloved, the acidity of the sauce and sharpness of the garlic cut its way to the opposite end of the flavor spectrum. It was an incredible blend of flavors that came together over one of the flakiest, most delicate cuts of fish I have ever experienced.

The fifth course consisted of tender beef slices served with sorrel, roasted potatoes and a sauce known only as Very Good Sauce. It’s somewhere between a jus and a gravy—and it is indeed very good. This dish was Sunday pot roast turned up to 11, and each element contributed to a satisfying wrap to the savory section of the menu.

Our last two courses were on the sweet side—a yogurt served with tangy rhubarb and honey, and a slice of chocolatey tarte ambrose with raspberries and vanilla cream. Both courses were stunning in their own way, and once again nailed Chef Finch’s ability to play with richness and acidity.

Arthur will be in full swing during the month of July with events taking place on July 9 – 10 and July 16 – 17. If tickets are still available, you can find them by checking out Chef Kevin Finch’s website, kevingfinch.com. You can also keep up to date with Kevin and Alexa on Tock and Instagram.