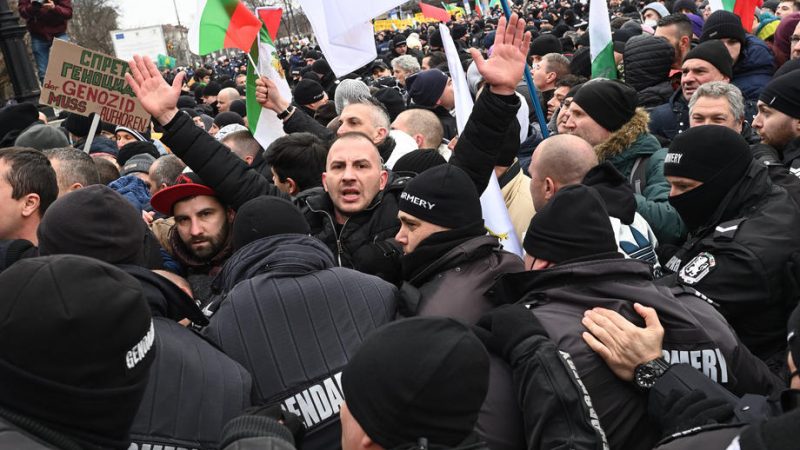 Anti-vaxxers rallied by the pro-Russian party ‘Vazrazhdane” tried to storm the Bulgarian parliament building on Wednesday (12 January) on the same day the country peaked with the highest-ever confirmed number of COVID-19 infections.

Some 500 protesters, brought from around the country with buses and waving the flag of the extremist party, attempted to enter parliament at 12:15 pm local time but were pushed back by police. The siege lasted more than two hours, and none of the protesters or the police wore masks.

Bulgarians must wear masks indoors and on public transport and show a health pass, given to the vaccinated, recovered, or those who have tested negative for the virus, to get into restaurants, cafes, shopping malls, and gyms.

Last month, the new centrist government appealed to vaccine-sceptical Bulgarians to get inoculated, offering a one-time cash reward of 75 leva (EUR 35.8) to pensioners who opt to get fully vaccinated or take a booster.

To lead by example, lawmakers voted to make the health pass mandatory for entry to parliament from 24 January.

‘Vazrazhdane’ (Revival) is a pro-Russian force represented in parliament for the first time following the November elections, having crossed the 4% threshold thanks to its anti-vaccine and anti-vaccine certificate rhetoric.

The party preaches that coronavirus restrictions are useless, because as they claim, even in countries with high vaccination rates, the infections are skyrocketing. The party organised the protest to press the government to give up the certificate for vaccination.

Despite their anti-vaccine rhetoric, most of the MPs from ‘Vazrazhdane’ are vaccinated against Covid, a recent investigation by bTV channel has revealed.

Bulgaria remains the EU country with the lowest vaccination rates at 28%. The death rate in Bulgaria is also the highest in the EU, and the second-highest worldwide, after Peru. According to official figures, the virus has killed 89 people in the past 24 hours in the Balkan country, bringing the total death toll to 31,761.

Daily coronavirus infections in Bulgaria reached a record high of 7,062 on Wednesday, primarily fuelled by the Omicron variant.

On the rise since the beginning of the year, new cases surpassed a previous peak set in late October.

More than 5,200 people were in hospitals, including 580 in intensive care. In the capital, Sofia, planned operations have been suspended as hospitals prepared to expand wards for COVID-19 patients.

Health authorities have said a surge in hospitalisations may mean new restrictions soon.