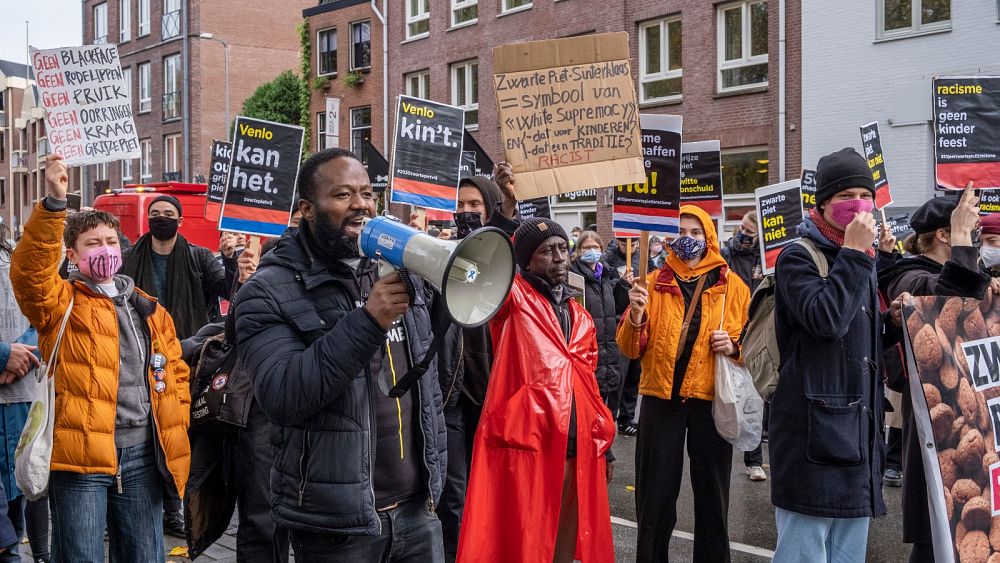 About 100 anti-racism protesters chanted “Kick Out Black Pete” on Saturday at an event where children could meet the Dutch version of Santa Claus and his controversial sidekick.

The Black Pete character, often played by adults wearing blackface makeup, has sparked a decade of demonstrations and counter-demonstrations in the Netherlands by protesters who consider him a racist caricature and supporters who insist he is a harmless children”s character.

Amid the long-running protests, people playing the character increasingly use different colour face paint, including daubs of soot. Many towns and cities organising children’s parties and parades to welcome the Sinterklaas character have moved away from Black Pete. At the event in the southern city of Breda, Sinterklaas was accompanied by Grey Petes.

One of the founders of the Kick Out Black Pete movement, Jerry Afriyie, welcomed the progress, but said more still has to be done.

“What we have achieved is that 10 years later no one can deny that there is racism in the Netherlands,” he said.

“Just like every movement, slowly but surely we are making progress, but we are not there yet,” he said. “I’m optimistic because I’ve seen this country be fully asleep, waking up bit by bit. So I think that it is a matter of time that all these people we’re seeing now in black faces that they make the change.”

Some parents at Saturday’s event in Breda were angry that the demonstrators were protesting close to the exit of the celebration that was a ticketed event due to coronavirus restrictions.

“I think it’s a scandal that this is being done at the exit where children come out after the Sinterklaas parade. Children are standing there crying, I find it inappropriate,” said Frank Zuidhof, who said he was in favour of Sooty Petes.

Police said they arrested seven people who approached the protesters and refused to move away.

Sinterklaas — a Dutch version of St. Nicholas — is celebrated in the Netherlands on Dec. 5 with gifts for children, but tradition has it that he sails to the country from Spain a few weeks earlier, leading to celebrations across the nation to mark his arrival.

Amid the Black Lives Matter movement last year, Dutch Prime Minister Mark Rutte conceded that racism is an issue in his country.

“There are also people living in the Netherlands who in that regard feel that they don’t fully fit in, that they can’t play a full role in this society,” he said. “That is also a Dutch problem. There is racism here, too. There is discrimination here, too.”