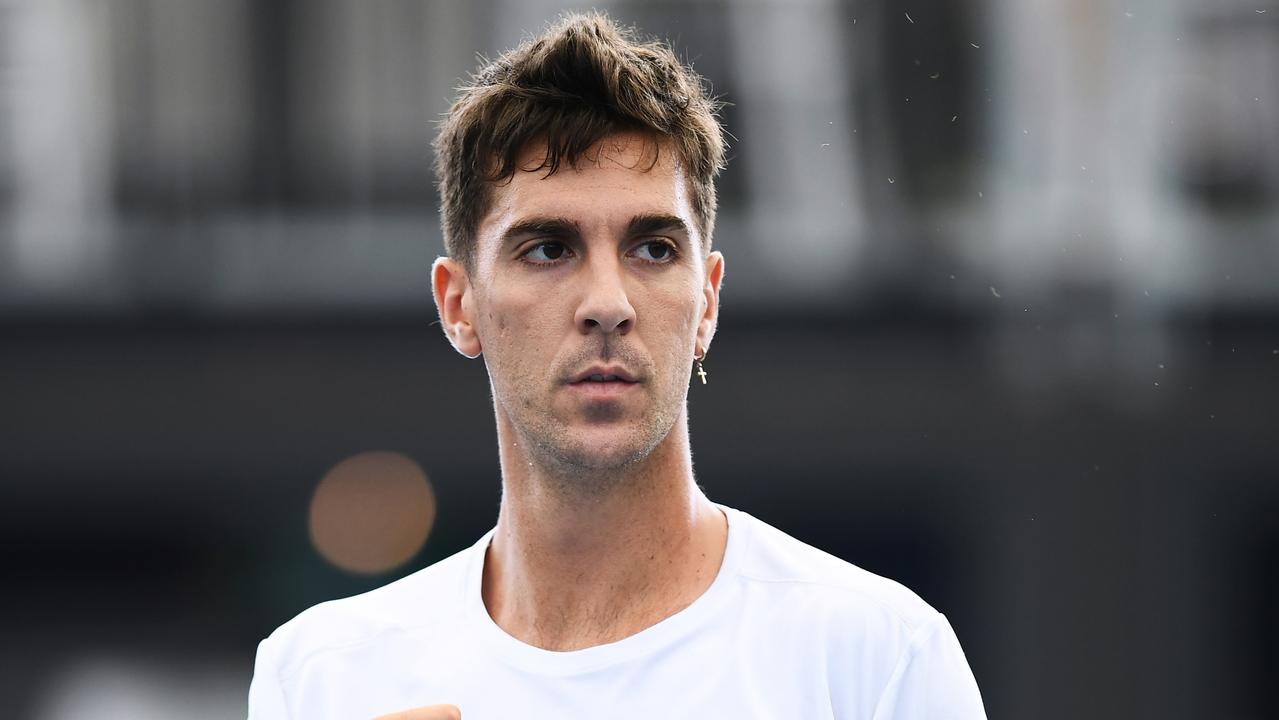 The second coming of Thanasi Kokkinakis looks every bit as good as the original.

Kokkinakis survived a triple-tie-break cliffhanger on Wednesday to upset No.2 seed and world No.24 John Isner to set up an all-Australian quarter-final against Aleks Vukic at the Adelaide International.

After a mature first-round dispatching of Frenchman Benoit Paire, Kokkinakis was tested far more against Isner but was impressive again.

Kokkinakis and the giant American combined to hit 40 aces and it was fitting that a third tie-breaker was required to finally split them.

“Playing (Isner) is not fun. I’ve had a few frustrating things in life but that one’s up there, for sure,” Kokkinakis said.

“You feel like you’re walking side to side – I just had to take my chances. I didn’t in the first set.

“I thought maybe I created the most chances in the first set, so I thought maybe that set was mine. But I had keep a clear head, had to try and just take care of my serve and see what happens.”

“It ends up being about, ‘How do I distract him without being an idiot?’ I was trying to stand on the fence, stand close, I don’t know. That’s why he’s so good and [has] been so good for so long.

“I just had to hope he’d miss a first serve, or if he jagged one, somehow return and be really sharp after that.”

Kokkinakis’ brilliant form dispels any thoughts the torrid injury period in his career would crush his spirit or stop him from realising his immense potential after emerging as a teenager.

He still has significant work ahead to break back into the top 100 and match his career-high ranking of No.69 from six years ago, but the building blocks are in place.

Kokkinakis had the only five break points in the first set – across two separate games – but Isner kept serving his way out of trouble before some aggressive returning helped secure him a one-set edge.

Neither player was troubled on serve in the second set, only for Isner to jump out to a 4-2 lead in the tie-breaker as he eyed the finish line.

But Kokkinakis snatched the first point on Isner’s second serve and fourth overall for the set, then the American poked a volley long as the Australian sent the contest to a deciding set.

The third set was a mirror image of the second, but Kokkinakis’ ability to win the first point of the tie-breaker on Isner’s serve – with a tricky, flick-of-the-wrist winner – was all that separated them.

“I feel great. It’s probably one of the best matches I’ve felt off the ground,” he said.

“It was tough; I had to be sharp. If my groundies weren’t on, then he was going to win the serving battle … (and) I kind of thought to myself, if I lose six and six here, I’m not even that mad.

“But, luckily, I stayed with it and it turned around.”

Vukic awaits in the quarter-finals after the Sydneysider, who will play in the Australian Open as a wildcard, avenged his defeat last week to American Steve Johnson.

He will move inside the top 150 for the first time after his 6-4 7-5 triumph over Johnson, which followed a maiden top-40 win in round one over Alexander Bublik.