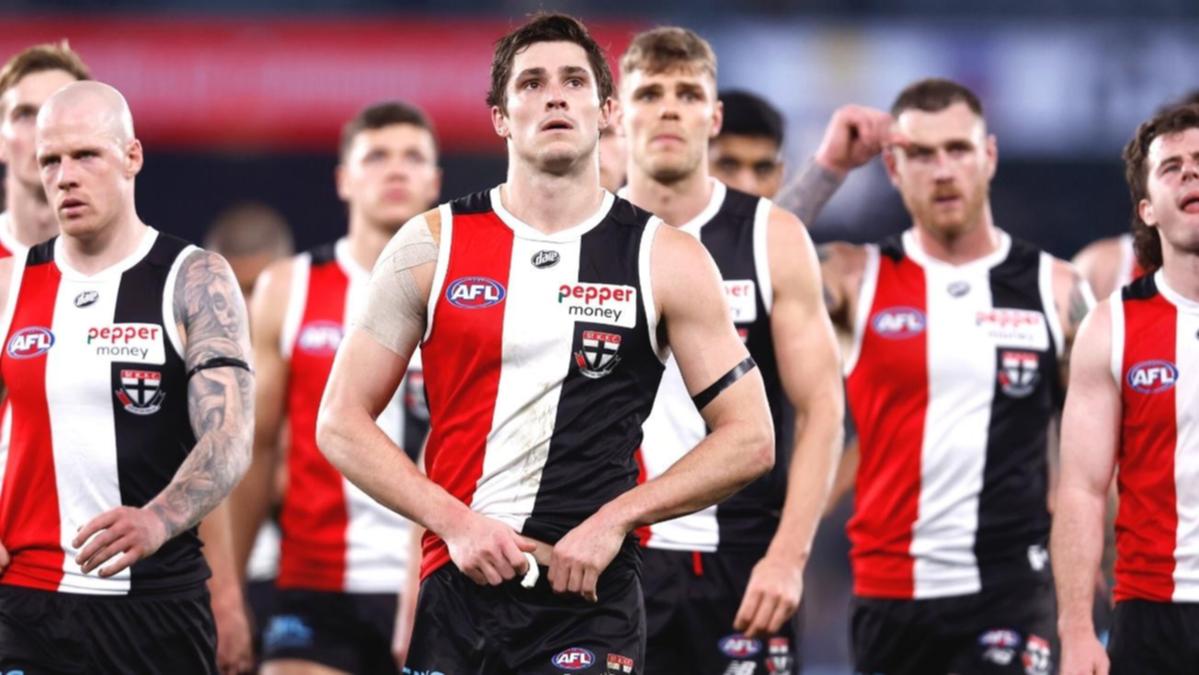 The looming spectre of COVID is threatening to again cast a grim shadow over a third straight AFL season, and St Kilda are getting on the front foot.

7NEWS reporter Tom Browne reported on Sunday night that the Saints had texted their players with a precautionary warning.

Watch Tom Browne’s report in the video above

Analysis, local footy and the biggest moments, Seven and 7plus are the home of footy shows for every fan. Stream them all for free on 7plus >>

“COVID’s back, according to one fitness boss I spoke to this afternoon – the Lions a case-in-point, missing five players (with COVID), arguably costing them the game,” Browne said.

“St Kilda have jumped on the front foot today, texting their players telling them to limit social interactions where possible.

“They’ll also, according to the club, speak to their players about the issue over coming days and weeks.”

Brisbane coach Chris Fagan admitted after his side’s loss to Essendon that his side is battling to keep Queensland’s latest COVID wave from crashing into the club.

A depleted line-up fell to a 10-point loss against the Bombers at the Gabba – the club’s fourth defeat in seven matches.

It means Brisbane are in a tight battle to hold onto fourth place on the ladder, with in-form Collingwood having drawn level on points after winning seven games in a row.

While Fagan expects all of his COVID-19 absentees, barring Noah Answerth, to be available for next weekend’s clash with GWS in Canberra, the threat of more cases in his squad as the virus sweeps through south-east Queensland is a real concern.

“We’re doing the best we can to minimise the amount of time they have to come in here, but that’s all we can do.

“They have wives and children that go to school … it’s a little harder now.

“Back last year and the year before, the whole of society was in a bubble, the rest of society is not. We’re trying to be, but it’s very difficult to manage that process.”

Queensland had over 4000 new cases of COVID-19 in the past 24 hours with deputy premier Steven Miles saying people should start wearing masks again in public if they’re concerned about contracting the virus.

Fagan said what steps the club takes going forward to minimise the impact of the escalating wave in their backyard will be guided by expert advice.

“Hopefully it can sort of slow down a little bit for us,” Fagan said.

“This has been our week.

“It’s not just players but staff have been sick as well.

“I got it last week and I thought I’ve been living pretty much like a monk for this football season, so I thought if I’ve got it, it can’t be that hard to get.”

The defeat is Brisbane’s first home loss of the season and just their second defeat in their past 18 games at the Gabba, but Fagan was still calculated as ever after the game.

“It was a really challenging week losing two or three players every day,” he said.

“I’m not going to go home tonight unhappy with them at all. I’m going to go home disappointed that we lost the game and frustrated, but in terms of effort and trying hard it’s a really decent effort I believe. Not the end of the world.”

Bombers coach Ben Rutten knew his side was up against a wounded opponent, but still didn’t want to discredit their win.

“It was eight or nine changes they had but they still had a pretty experienced, potent team out there and to come up to the Gabba at any time against these guys at the moment is a difficult task,” he said.

“We knew they are going to be up for the fight, Brisbane were going to bring it to us and, yeah, I was really pleased with the way we stuck at it.

“They’re the sorts of games against good teams on the road that we need to be up for.

“I thought the way we handled it showed some maturity and some real grit.”

Kyrgios cops criticism over ‘final act of defiance’ at Wimbledon