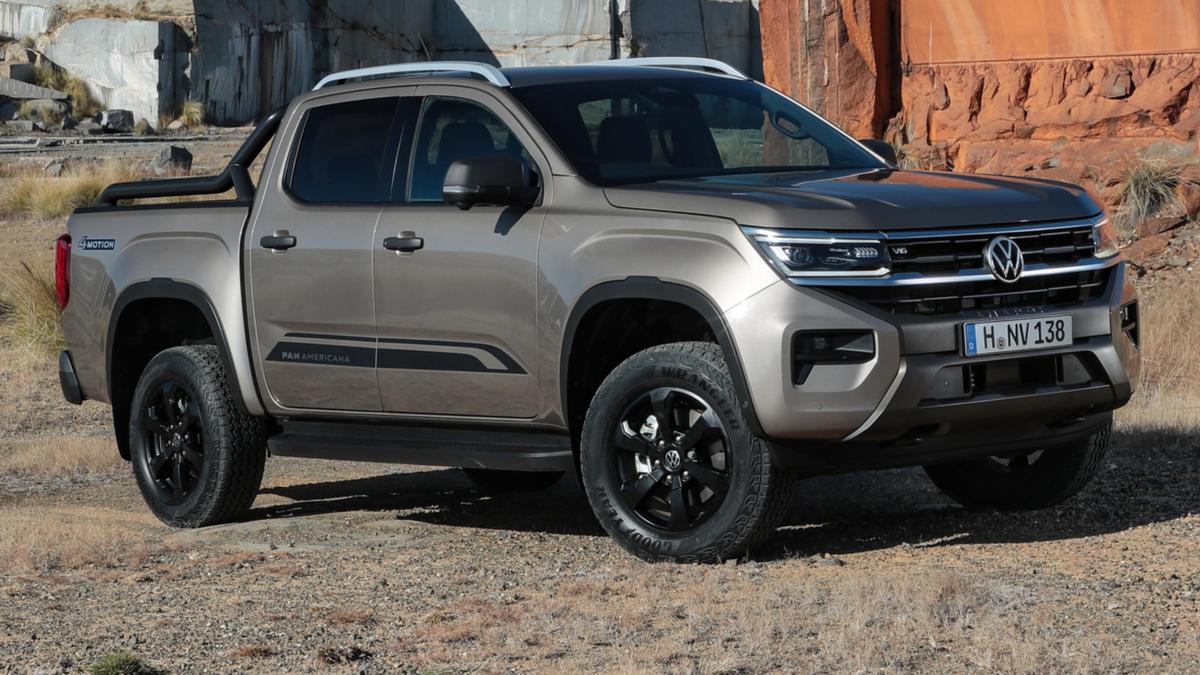 Volkswagen has revealed its new Amarok ute, which is set to arrive in Australia early in 2023.

The new Amarok is built on the same platform as the Ford Ranger, with power coming globally from a choice of five engines. Three turbo-diesels and one turbo petrol will be coming to Australia.

Compared to the outgoing Amarok, which first went on sale locally over a decade ago, this new model brings a modern touch to the ute segment and is designed to move ahead of the Toyota HiLux and Isuzu D-Max.

For more Motoring related news and videos check out Motoring >>

The following is a quick guide to how the new model compares with its venerable predecessor on paper.

Power in the Australian-spec 2023 Volkswagen Amarok will come from a range of four Ford-sourced engines: three turbo-diesels, and one turbo petrol.

These engines in the new Amarok are:

These outputs mirror what’s currently available in the Ford Ranger, although Volkswagen misses out on the twin-turbo V6 petrol engine used in the Ranger Raptor.

Volkswagen will offer petrol power in the Amarok, however. Volkswagen has confirmed a 2.3-litre turbocharged four-cylinder petrol that’s not offered locally in the Ranger will be available to Australian buyers.

A version of this 2.3-litre EcoBoost engine features in the older-design US-market Ranger and numerous Ford Performance passenger cars.

The outgoing Volkswagen Amarok, on the other hand, is available with a total of five different in-house developed turbo-diesel engines.

The engines in the outgoing Amarok and their outputs are as follows:

Notable changes between the new and outgoing Amarok models in regard to their drivetrains, besides the obvious Ford sourcing, include a new 10-speed automatic transmission that replaces the outgoing eight-speed unit.

Another change in the new Amarok is the fact diesel models receive a larger 19.3L AdBlue tank instead of the 6.3L unit on the outgoing car. All new Amarok models have a 80L fuel tank though, which is the same size as before.

Both the outgoing and new Amarok offer either part-time or full-time 4Motion four-wheel drive depending on model.

The flagship 2023 Volkswagen Amarok model’s 3.0-litre V6 turbo-diesel produces 184kW and 600Nm, mated with a 10-speed automatic transmission. This is 6kW less but 20Nm more than the most powerful V6 turbo-diesel engine in the outgoing model.

The exterior dimensions for 2023 Volkswagen Amarok compared to the outgoing model isareas follows:

These figures show the new Amarok is considerably longer than the outgoing model, while being narrower and a similar height.

The 2023 Volkswagen Amarok will be offered in single- and dual-cab bodies depending on the market, although it’ll be dual-cab only in Australia.

The outgoing Amarok, on the other hand, was originally offered with a single-cab option, but has been dual-cab only locally since 2017.

Payload in the 2023 Volkswagen Amarok is up to 1160kg, which is 127kg more than the outgoing Amarok which offered a payload figure up to 1033kg.

Braked towing capacity in the new Amarok is up to 3500kg, which is the same as what the outgoing Amarok offers.

As was the case on the predecessor, the cargo bed between the wheel arches has enough room for a Euro pallet loaded in sideways, strapped down via eye rings on the cargo bed, which can each take a load up to 500kg.

Static roof load capacity on the new Amarok is 350kg, whereas the outgoing Amarok’s maximum permissible roof load is only 100kg.

Fording depth has increased in the new Amarok from 500 to 800mm.

The outgoing Amarok is available in Core, Sportline, Highline, Aventura trims, in addition to a number of W-Series models that are upgraded by Walkinshaw in Melbourne, Victoria.

The new Amarok retains the overall ute silhouette of the outgoing model, but has a number of changes including a more upright grille, slimmer headlights, more pronounced wheel arches, C-shaped tail lights.

The outgoing Amarok for context is available with halogen and bi-xenon headlights, depending on the trim level.

The cargo box in the new Amarok can be secured using an electrically-operated roll cover on high-end grades which can be operated from inside the vehicle or by a remote control on the key.

The 2023 Volkswagen Amarok is available with wheels ranging in size from 16- to 20-inches. The base model has steel wheels, mid-spec models have alloy wheels, and the top-spec model has aluminium wheels.

There will be eight colours to choose from in the new Amarok configurator:

The outgoing Amarok is available in a very similar exterior colour palette, but doesn’t have a red or beige option.

Inside is where the 2023 Volkswagen Amarok takes things to the next level. There are a number of changes compared to the outgoing model.

The whole range of new Amarok models feature vertically-oriented touchscreens in the middle of the dashboard.

The outgoing Amarok has a 6.33-inch ‘Discover Media’ touchscreen and a monochrome multi-function driver cluster display.

Available on both models is Apple CarPlay and Android Auto.

The interior in the 2023 Volkswagen Amarok looks a lot more modern than the outgoing model and has a row of hard function keys finished in what looks like rugged rubber. High-end models will feature aluminium around that row of keys.

The new Amarok also has 20 storage spaces around the cabin, and available features in Europe will include a wireless phone charger, keyless entry and push-button start, dual-zone climate control, and a three-pin power socket in the cabin.

The last Amarok was short on active safety features. The new one won’t be.

Hands-free parking will also be offered on some models, along with front and rear parking sensors and a surround-view camera.

Expect a full gamut of airbags to feature for both front and rear occupants, unlike in the previous model (which missed out on rear side airbags).