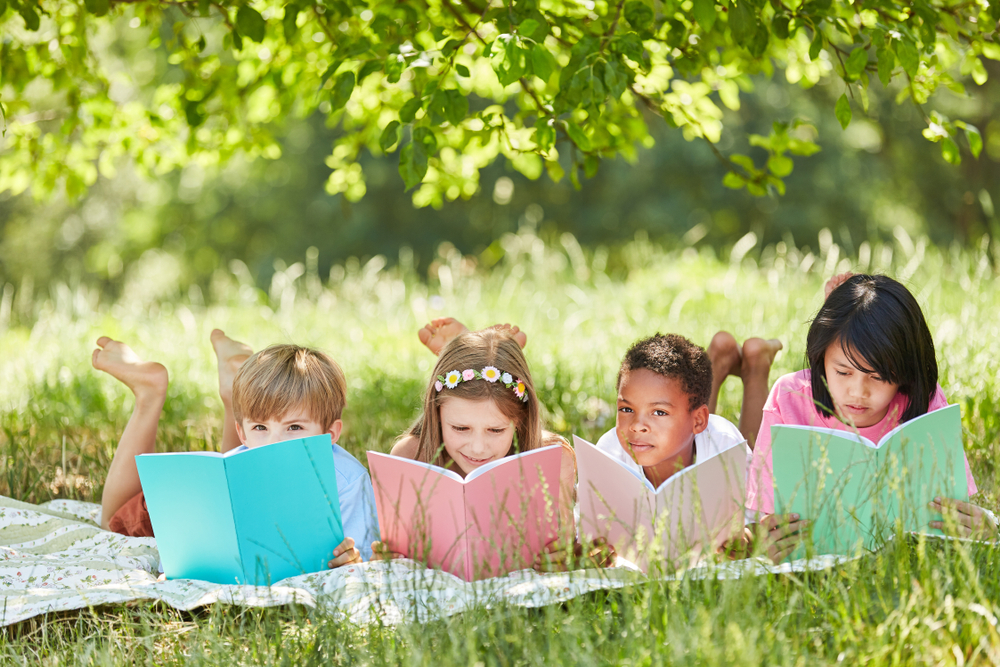 What better time to sit down on a lazy afternoon than in summer? I have compiled some great books for kids ages eight and above to enjoy over the summer. Some of these would be terrific read- out-loud as well. So, what are you waiting for? Get your kids excited about reading and the enjoyment that comes with it!

Search for Treasure (The Islanders), by Mary Alice Monroe, is Book Two in this wonderful series but this book can also stand alone. It takes place off the coast of South Carolina on an island that is restricted to only the people who live there. These residents are protective of the animals and vegetation and keeping the island safe. Three young friends have heard about a treasure box hidden somewhere on this island and set out to find it during their summer off from school. But as you read about these friends, they bring other elements to the story with problems each is dealing with. This book begs to be read-out-loud with the adventures the friends experience but also the problems they face.

Dungeoneer Adventures 1: Lost in the Mushroom Maze, by Ben Costa and James Parks, is a highly illustrated fantasy book that is rich in imagination and language. Young Coop is the only human in The Dungeoneer Academy and has difficulty fitting in. But he has a great friend and help in Oggie the bugbear who is always there for him. The classes Coop takes, like Dungeons and Mazes, help prepare him for future difficulties. This exciting story is all about how he and Oggie get through the difficult and very unique tasks at the academy.

The Pear Affair, by Judith Eagle and beautifully illustrated with full page etchings sprinkled throughout by Jo Rioux, is a wonderful historical fiction mystery. Set in 1969, the context that surround that era is interesting and add to the mystery. Young Nell lives with her rich parents who seem more interested in their wealth than her. When the parents must take a trip to Paris, Nell convinces them to take her along. Her most beloved past au pair, Pear, lives there and has suddenly stopped writing to Nell. She, along with a smart young bellboy named Xavier, search the Paris city to solve what happened to her kind friend. This story will hold the reader spellbound with all the adventures Nell and Xavier get into. The stunning illustrations are a huge bonus making this a perfect read-out-loud.

Coming Up Short, by Laurie Morrison, is a story about a girl, Bea, who loves to play softball, who loves her family and is close to her teammates. But when her attorney father is caught embezzling money from a client, Bea feels her life fall apart. This excellent story showcases that families, friends, and other relationships take continual effort of love, compassion, maintenance, and above all, forgiveness. The chapters that concentrate on Bea and her team competing with the opposing team is a page turner. Here is another perfect read-out-loud!

Loki: A Bad God’s Guide to Being Good, by Louie Stowell, is a mythological adventure of Loki and all the trouble he seems to find. This graphic novel reads more like a journal and is great fun and actually quite hilarious. Loki is a Norse god and has attempted way too many pranks and now has been banished to live as a kid on earth. And so begins one of the funniest books you have ever read. The drawings and doodles are just as fun as reading about Loki. If you have a child who has yet to discover the joy in books, this is the book for them. Chances are anyone who pours over the story will most likely laugh out loud!

The Patron Thief of Bread, by Lindsay Eagar, that takes place in a medieval world full of magic and fantasy. The story alternates between Duck, an orphan in a band of urchins, and an old gargoyle perched high above a church. Duck’s life becomes complicated when she must steal coins for the urchins from the kind village baker. But he soon hires her as an apprentice and she’s not sure where her allegiance belongs. This book is richly told in an elegant style with wondrous descriptions, but not too wordy. You will find yourself immersed in the story from beginning to end.

Skandar and the Unicorn Thief,by A. F. Steadman, is a thrilling adventure that takes Skandar Smith beyond his wildest imagination. Skandar lives on the mainland and hopes to pass the Hat Henry exam so he can become a unicorn rider. But this is a very treacherous feat as these unicorns are dangerous and wild and can only become docile with a rider. But on the day of the exam things go horribly wrong for Skandar until a stranger comes knocking on his door at midnight. His life completely changes. Be ready for a book unlike any other to take you to an extraordinary land. This is the first book in a planned series.

Molly and the Machine, by Erik Jon Slangerup, is a page-turner that will keep you reading to the end! This first book in a planned series is a romp of madcap adventures that is both fun and gripping. It’s 1983 and Molly has been noticing children disappearing from her Ohio town. But when her little brother vanishes, she takes matters into her own hands. What she discovers involves a possible giant robot and the mystery develops from there. The next book, Molly and the Mutants, isplanned for next year and should be just as fun. Here is another great read-out-loud.